Are you ready for some Old-time rock'n roll? Vintage Party is your choice venue for classic rock party music from the 50's to the 90's. We consist of some of the areas most experienced and accomplished musicians…

We are all about getting the party started and the crowd on the dance floor. Our audiences range from 20-somethings to 60 plus (going on 20). We are family friendly and play the music everyone remembers and loves.

Tom has been performing with music groups since the age of 17. After attending Berklee College of Music in his 20's he fronted various bands singing, playing guitar and writing most of the music. His band KLEEN KUT was a staple on the Boston circuit of original bands circa early 1980's. Throughout the 90's and early 2000's Tom's band FREE SPIRIT played hundreds of shows throughout New England and beyond. Tom is a natural on stage.  If you want to see a front man who knows how to get the crowd rockin....HE'S THE GUY. Come see Tom and the rest of the boys from Vintage Party.

Early in the 1970's he spent time playing in local Boston area bands which led him to a summer working in the house band in a Catskills resort. There he picked up his appreciation for jazz, blues and developed his chops on the string bass. Don toured with Lonesome Dave Clark, and Chicago Bob, ex-Muddy Waters player and played regular gigs with Luther Johnson down at the old Highland Tap, Speakeasy, and Bunratty's in the 1970s.

During the 80's Don took a break from playing live music to raise a family. He did continue to be involved with theater sound design, audio electronics, and appeared on stage in local community theater. He rejoined the music scene in the mid 1990s to do fill-ins on both bass and acoustic guitar. In early 2000's he began to perform at benefits and the occasional pub with Maria Breen's Just For Fun and Acoutic Fire.

Now, Vintage Party is excited to have Don playing the classics with us. for the last few years.

Eric fell in love with the sound of the electric guitar in high school – sparked by the three-guitar army sound on Lynyrd Skynyrd’s “One More for the Road” double live album.   The combination of blues-licks on top of hard driving rock become a lifetime obsession.    The Johnny B. Goode scene from Back to Future (check it out on YouTube) only reinforced the obsession with the powerful effect rock ‘n roll can have (it save McFly’s parents’ marriage!).   But nothing impacted Eric’s love of the guitar as a winter night in Middlebury Vermont at the local pub (the Alibi! – sadly defunct now) that always had live bands with no cover on Thursday nights.  There was a $2 cover that night, but it turned out to be the best investment ever – Johnny Copeland, on his way to a Burlington, VT weekend gig was the live entertainment.   Known as the “Texas Twister”, Copeland had appeared and recorded Stevie Ray Vaughn – and he was playing typical hard charging Texas blues.  (Check out the live version of “Everybody Wants a Piece of Me” from Montreux, 1983 for a sample.)   Eric was hooked and shortly thereafter bought his first electric guitar (after spending years playing cowboy chords on acoustic guitars).

After some experimentation to learn how to control distortion and volume with the electric guitar, Eric started playing in bands on rhythm guitar, then lead guitar, and then added lead and backing vocals.  Eric has been performing in Classic Rock, Modern Rock, and Blues Rock cover bands for over 15 years.   From the New Jersey shore to Maine piers, rockin’ wedding receptions, and clubs large and small, Eric loves playing live music and is thrilled to be collaborating with the outstanding musicians and friends in Vintage Party.

As one of the founding members of Vintage Party, Joe has been playing drums off and on since he was fourteen.  He remembers listening to the Beatles,  The Stones and Jimmy Hendricks with his older broker Nick, who introduced him to drumming on an old white mother of pearl Rogers kit.  When he left for the National Guard, he left me his albums and drums and I never looked back.  Now as an adult, I still enjoy the oldies as much as the newer rock music.   And now, I've passed it down to my son. 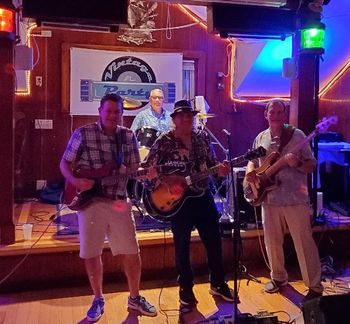 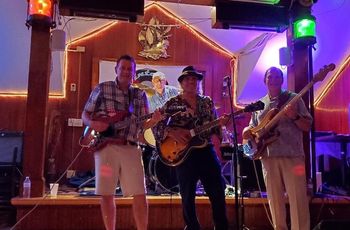 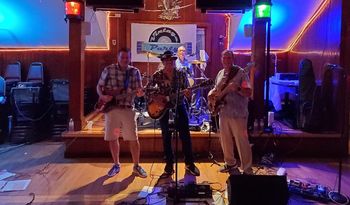 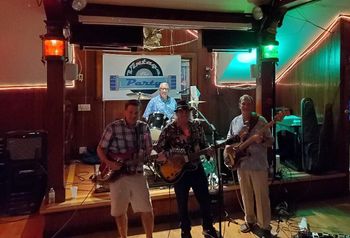 We are back and booking indoor and outdoor events.  Call for your venue today: private parties, corporate functions, fundraisers and club nights.

AUTHORITY SONG
BAD BOY
BE BOP A LULA
BEFORE YOU ACCUSE ME
BITCH
BLISTER IN THE SUN
BORN ON THE BAYOU
BORN TO BE WILD
BROWN SUGAR
CAN'T YOU SEE
COCAINE
CROSSCUT SONG
DANCING WITH MYSELF
DEAD FLOWERS
DIRTY WATER
DREAM LOVER
FIRE DOWN BELOW
FOLSOM PRISON BLUES
FORTUNATE SON
GET BACK
GIMMIE THREE STEPS
GOOD LOVIN
HANG ON SLOOPY
HARD TO HANDLE
HIPPY HIPPY SHAKE
I FOUGHT THE LAW
I THINK WERE ALONE NOW
IT'S ALL OVER NOW
JENNY JENNY
JET AIRLINER
JOHNNY B. GOOD
KEEP YOUR HANDS TO YOURSELF
KNOCKIN' ON HEAVENS DOOR
LAID
LAY DOWN SALLY
LET IT BLEED
LITTLE SISTER
LOUIE LOUIE
MARY JANE'S LAST DANCE
MONY MONY
MUSTANG SALLY
NEW ORLEANS
OLD TIME ROCK AND ROLL
ONE WAY OUT
PLAY THAT FUCKY MUSIC
PRIDE AND JOY
ROADHOUSE BLUES
ROLL OVER BEETOVAN
SHOTGUN.
SLOW DOWN
SOME KIND OF WONDERFUL
STATESBORO BLUES
STORMY MONDAY
SWEET HOME ALABAMA
SWEET HOME CHICAGO
SWEET JANE
SYMPATHY FOR THE DEVIL
TAKIN CARE OF BUSINESS
THANK-YOU
THE WANDERER
TNE BREAKUP SONG
UNCHAIN MY HEART
WHAT I GOT
WHAT I LIKE ABOUT YOU
WILD THING
YOU MAY BE RIGHT
YOU REALLY GOT ME